Craniopharyngioma is a type of brain tumor derived from pituitary gland embryonic tissue that occurs most commonly in children but also in men and women in their 50s and 60s. Craniopharyngiomas are relatively rare. Craniopharyngiomas can grow to large sizes, even bigger than a golf ball, and may not cause any symptoms in the beginning. 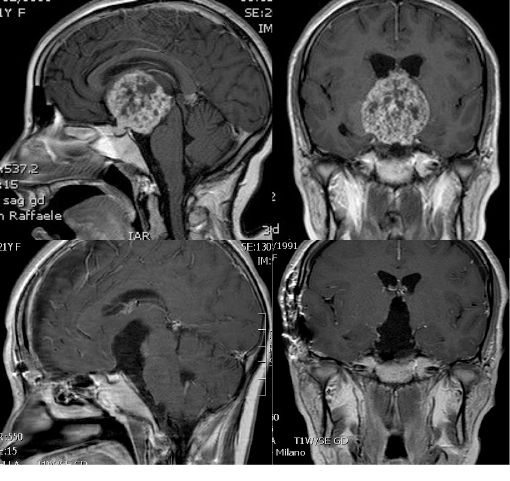 In children, hormone deficiency can result in:

In severe cases, it can be fatal. Symptoms include:

• Hypothyroidism, caused by a reduction in TSH production. Symptoms include:

• Reduction in prolactin production. This is very uncommon and occurs with severe pituitary insufficiency.

If the hypothalamus, an area at the base of the brain, is affected, symptoms may include:

(MRI) scan the neuroradiologist to view the tumor from different angles. A CT scan can detect calcification in the tumor
Pituitary hormone function testing is necessary for every patient with a craniopharyngioma. An endocrinologist who specializes in pituitary tumors will help evaluate the results.

The two basic approaches are:

The endoscopic endonasal approach is a minimally invasive approach, using your natural nasal passageway. It does not require a head incision. An endoscopic technique can be very effective in safely removing tumor, while at the same time minimizing hospitalization time and discomfort, however, not every craniopharyngioma tumor can be removed using an endonasal endoscopic approach.

During an open craniotomy, the surgeon:
1. Makes an incision into your scalp
2. Temporarily removes a piece of your skull
3. Uses a surgical microscope to provide high magnification of the area
4. Access and remove the tumor; the most common approach involves gently elevating the base of the frontal lobe of the brain, above the eye.

Stereotactic radiosurgery is a technique that uses a highly focused dose of radiation delivered directly to the tumor. Because the radiation beam is sculpted to target only the tumor, the surrounding brain structures receive only a fraction of the radiation dose and may remain unharmed.
One drawback of radiation treatment is that it leads to delayed pituitary failure. This typically occurs several years after treatment, necessitating complete hormone replacement

Pituitary hormonal dysfunction is common after craniopharyngioma surgery and/or radiation therapy. Problems with hypothalamic function can be particularly challenging to treat. You will require careful monitoring and follow-up visits with an endocrinologist.